Over 6.8 lakh houses constructed under ‘Housing for All’ scheme
Read more » 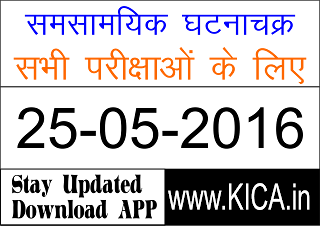 Arjun does it again - this time the fifth highest peak!
Read more »

UNODC launches inaugural World Wildlife Crime Report
The United Nations Office on Drugs and Crime (UNODC) on 24 May 2016 launched its inaugural World Wildlife Crime Report. The report highlights how the poaching and illegal trade of thousands of different species across the globe present real environmental dangers.
The report also urges shared responsibility in tackling this crime given how products made from illicit
Read more »

Violent young sun may have seeded life on Earth: NASA
Solar storms four billion years ago may have provided the crucial energy needed to warm Earth and seed life despite the Sun’s faintness, new research has revealed.
Some four billion years ago, the sun shone with only about three-quarters the brightness we see today, but its surface roiled with giant eruptions spewing enormous amounts of solar material and radiation out
Read more »

Greece gets new funds approved by eurozone creditors
Greece has won an essential batch of bailout funds from international creditors following agreement among the 19 eurozone finance ministers and can start looking forward to debt relief in the future.
After the ministers approved Greece’s recent reform efforts, they decided early on Wednesday to disburse 10.3 billion euros ($11.5 billion) in funds to see Athens through the next months.
Read more »

Afghan Taliban appoint Haibatullah Akhundzada as new leader
The Afghan Taliban confirmed on Wednesday that their former leader Mullah Akhtar Mansour was killed in a U.S. drone strike last week and that they have appointed a successor.
In a statement sent to media, the insurgent group said its new leader is Mullah Haibatullah Akhundzada,
Read more »

Hillary picks Neera Tanden for panel
Indian-American Neera Tanden, president of the Centre for American Progress (CAP) and a long-time associate of presidential frontrunner Hillary Clinton, has been nominated to the Democratic platform committee that will draft the party’s policy agenda for approval by the national convention in July.
Read more »

US lifts embargo on sales of lethal weapons to Vietnam
United States has fully lifted its embargo on sales of lethal weapons to Vietnam, its one-time enemy. This move of US removed a lingering vestige of the Cold War that was seen in South East Asia in 1970’s. It was announced by US President Barack Obama during his official state visit to Vietnam and after talks with Vietnamese President Tran Dai Quang. He is the third US President to visit Vietnam since the end of the Vietnam War in
Read more »

Delhi-based NGO Routes 2 Roots awarded Inter-cultural Innovation Award 2016
Routes 2 Roots, a Delhi-based Non-profit organization (NGO), has been awarded prestigious Inter-cultural Innovation Award 2016. The award was bestowed upon the NGO for their unique Student Exchange Program, which allowed children in schools from India and Pakistan to connect with each other. The award was given by United Nations Alliance of Civilizations (UNAOC) in Baku, Azerbaijan. Key facts Under this programme, students
Read more »

Indian students win six awards at Intel competition in US
Indian students have won six awards at the Intel International Science and Engineering Fair (ISEF) in the US where New Delhi’s Shreyas Kapur was declared the grand winner of the “Google Thinking Big Award.” Organised by Intel Corporation and the Society for Science and the Public in Arizona this month, the Indian team comprising 16 students won a total of $9,500
Read more »