Almost a all of us uses plastic bottles to carry drinking water whenever we leave
Have you ever noticed or paid close attention to the symbol printed below those bottles? A number inside a triangle. 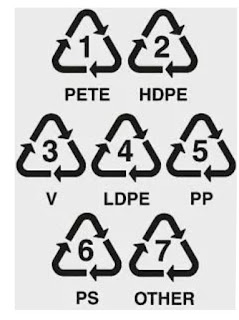 This symbol is generally ignored by most of the people without realizing its significance. It represents the material that goes into the making of that specific bottle.


Some plastics may leach chemicals into your drink which may have serious effects like breast cancer and uterine cancer in women, decreased testosterone levels in men, Diabetes, particularly devastating to babies and young children etc.
It is worth paying attention to the type of plastic your water bottle is made of, to ensure that the chemicals in the plastic do not leach into the water. If you taste plastic, you are drinking it, so get yourself another bottle.
If it is a #2 HDPE, or a #4 LDPE, or a #5 PP , your bottle is fine. These bottles don't leach.
The type of plastic bottle in which water is usually sold is usually a #1 PET, and is only recommended for one time use. Do not refill it.
I usually see people using their soft drink bottle for drinking water storage purposes. Those bottles are #1 PET, so you must stop re-using them.
For babies, i would rather suggest you use glass bottles, it's risk free.
If you have used or re-used such bottles already, remember


There is no better time than now to start living healthy :)

High-density polyethylene (HDPE) or polyethylene high-density (PEHD) is a polyethylene thermoplastic made from petroleum. It is sometimes called "alkathene" or "polythene" when used for pipes. With a high strength-to-density ratio, HDPE is used in the production of plastic bottles, corrosion-resistant piping, geomembranes, and plastic lumber. HDPE is commonly recycled, and has the number "2" as its resin identification code (formerly known as recycling symbol).
In 2007, the global HDPE market reached a volume of more than 30 million tons.

Low-density polyethylene (LDPE) is a thermoplastic made from the monomer ethylene. It was the first grade of polyethylene, produced in 1933 by Imperial Chemical Industries (ICI) using a high pressure process via free radical polymerization. Its manufacture employs the same method today. The EPA estimates 5.7% of LDPE (recycling number 4) is recycled. Despite competition from more modern polymers, LDPE continues to be an important plastic grade. In 2013 the worldwide LDPE market reached a volume of about US$33 billion

Polypropylene (PP) is used primarily for jars and closures and provides a rigid package with excellent moisture barrier. One major advantage of polypropylene is its stability at high temperatures, up to 220 °F (104 °C). Polypropylene is autoclavable and offers the potential for steam sterilization. The compatibility of PP with high filling temperatures is responsible for its use with hot fill products. PP has excellent chemical resistance, but provides poor impact resistance in cold temperatures.

As per various studies it says:

These plastics are typically used to hold soft drinks, water, juice, sports drinks, beer, mouthwash, ketchup, and salad dressing. They’re also used as containers for peanut butter, jelly, jam, and pickles. This type is also used in oven-friendly film and microwavable food trays.
This plastic is considered to be safe, but there are some issues to be aware of.
The primary problem is that antimony, a metalloid element with toxic qualities, leaches from PET. The rate of leakage increases with temperature. Normally, the amount of antimony that seeps into liquid is well below the U.S. Environmental Protection Agency’s maximum contaminant level. But that assumes the container stays at room temperature.
According to the U.S. Center for Disease Control (CDC), antimony can cause acute and chronic health issues, such as diarrhea, vomiting, and stomach ulcers.
Studies indicate that storage of these bottles at extended periods of time, and at increased temperatures, can result in unhealthy amounts of antimony. For example, a bottle stored at 60 degrees C for 176 days will yield unhealthy levels (maximum contaminant level (MCL) of 6 ppb), as would a bottle stored at 85 degrees C for just 1.3 days. These are very reasonable temperatures, and could typically be reached in warm garages or cars in the summertime.
Three years ago, a study showed that microwaving can significantly increase the rate at which antimony leaches into PET bottles. The authors recommended that plastic bottle manufacturers wash bottles before first use to remove metal contaminants like antimony.
And in 2012, a study indicated that, in addition to antimony, brominated compounds can also leach into PET bottles. Bromine, a naturally occurring element that is a liquid at room temperature, can irritate the skin, mucous membranes, and tissues. But it’s not clear from the study if the concentrations of leaked bromine are at dangerous levels.
Posted by Shamiratan G Sah at 22:49:00